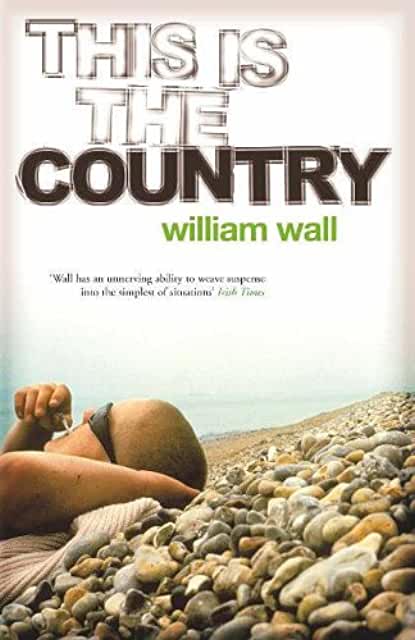 This Is The Country

Longlisted for the Man Booker Prize. Under option for film.

This Is the Country becomes a more and more resonant title as the book progresses: in the end Wall gives us a cleverly wrapped précis of modern Ireland, the problems inherent to its new-found wealth and leisure (and what is happening to those who can’t participate in that), old class and religious divisions. The title begins as a kind of mantra, something the city chancer fleeing into the “bogs” keeps telling himself as he adjusts to a different, frightening, self-reliant way of life, and ends up meaning “this is the state of my nation”. He sleeps rough in the barn of a moribund farm (“I didn’t know then that farms can die of grief”), and begins, almost obsessively, to repair the engine of an abandoned tractor. The protestant farmer, who has also lost his wife, detects his presence and, instead of throwing him out, “adopts” him, and the two become firm, satirically bantering friends, the farm revitalised.” Todd McEwan, The Guardian

Read the full review below or click here to be taken to the Guardian page.

Todd McEwan's Guardian review of This Is The Country

Call it the stuff of ITV drama, of thrillers, but there is an unnecessary melodrama to this book. William Wall is a genuine literary talent, with a poet’s gift for apposite, wry observation, dialogue and character. To his credit he hangs his talents lightly on a nervous little plot about a man escaping drugs, losing his wife to gangsters, therefore losing his daughter to the social services, and plotting to get her back. None of this is needed, for This Is the Country is a masterful, ironic book of loss and bitter optimism, money and poverty, the impossible divide between city and country.

It is the story of someone desperately but resolutely straightening himself out, and how ragged and forever incomplete a thing that may be. By focusing on something real for the first time in his life (the workings of engines), he becomes real. The hero (who has a name, by the way, but I can’t reveal it) never loses touch with people he wronged, and who hurt him. Wall paints a permanent, shabby wound to his country in the drug scene: “See kids on the edge of mourning crowds talking like big men about how this poor bastard OD’d or fell out of a window or got Aids or bad gear or set fire to himself, like this was a hero’s death. Like he died for Ireland. Wondering when they’ll be old enough to do the same.”

Wall has an admirable power of poignant description. In their druggy days, the narrator and his friend flee the police through a kaleidoscope of different estates: “By the time we stopped, it was like we changed languages. Every garden had this weeping tree with kids in Benetton playing on the grass. The cars were all clean. Women walked big dogs. They wore sunglasses and smelled like fields. We had no name for this place we found ourselves in, but we wanted it bad.” There are trenchant observations, worthy of Swift, on Irish society: what new money has meant, the police, the judiciary, the media, the “property ladder”. Through it all runs a genuine sadness about families. Time and again the hero finds himself looking in windows at settled people, cynically finding their lives cartoonish, but also wishing he were inside.

Wall’s touch with characterisation is light and deft: many illustrate themselves plainly with just a few lines of dialogue. There are some pretty echoes of the fondness Holden Caulfield felt for his sister Phoebe, and his dead brother Allie, in the hero’s relationship with his daughter, and his mourning of a youthful friend who dies of tetanus (when it seemed drugs would do for him).

This Is the Country becomes a more and more resonant title as the book progresses: in the end Wall gives us a cleverly wrapped précis of modern Ireland, the problems inherent to its new-found wealth and leisure (and what is happening to those who can’t participate in that), old class and religious divisions. The title begins as a kind of mantra, something the city chancer fleeing into the “bogs” keeps telling himself as he adjusts to a different, frightening, self-reliant way of life, and ends up meaning “this is the state of my nation”. He sleeps rough in the barn of a moribund farm (“I didn’t know then that farms can die of grief”), and begins, almost obsessively, to repair the engine of an abandoned tractor. The protestant farmer, who has also lost his wife, detects his presence and, instead of throwing him out, “adopts” him, and the two become firm, satirically bantering friends, the farm revitalised.

In the end, Wall’s hero finds himself fog-bound, adrift in the sea, then, when the mist lifts, afraid of it. He is in a vast school of jellyfish, for whom he feels quite a bit of empathy: “They must be eating something; easy enough for the guys on the edge, but in the middle it was hard times. They didn’t look like they could just decide to go shopping somewhere else. If they had brains they were maybe thinking things out, deciding this is the way it is, they better get used to it, it’s nothing special” – much as he felt about the people he grew up with in the grim housing estates in the city. Not to belabour the point, it’s time that Wall lost his own fear of the “sea”, fixed up his boat and really pushed it out. He doesn’t need the rusty armature of such a plot any more.

John Kenny's Irish Times review of This Is The Country

Though he still sometimes works in poetry, Corkman William Wall now tends to refer to himself as a “lapsed poet”. Comparatively quietly, yet speedily, his new reputation has been established by the three novels he has published in the last five years. A crucial factor in the respect Wall has incrementally won for his prose over this short time is the identifiable uniformities of his subjects. Even though they vary somewhat in style, Alice Falling (2000), Minding Children (2001) and The Map qf Tenderness (2002) have all focused to a significant degree on the domestic social unit, something Wall once underlined in an interview with this paper: “I’m fascinated by the way families disintegrate. It can happen so easily; the bonds that hold people together are so obscure. And the idea that blood is ticker than water is rubbish.” His baneful take on the Irish family, his fundamentally anti-idyllic mood, have not enirely endeared Wall to the more misty-eyed among his readers at home or abroad.

With an echo at its very end of the rejected blood-versus-water imperative, This is The Country sustains both the core mood and theme that Wall has established as his mètier. We are in perhaps even more comprehensively sinister country this time.

After a somewhat needless eponymous introductory poem, we are told, in fairly short and titled but unnumbered chapters, the story of a well-intentioned but drug-damaged young Irishman through his own voice. He begins in medias res, thus establishing a pattern whereby his narrative will move, frequently at headlong speed, backwards and forwards in accounting for the events that have taken him through a vagrant youth, through victimisation and forced migration from his city to the country, through attempts at reconstruction with his own girlfriend and daughter, through resurgent violence and murder, involvement with the law, and final tragedy.

Seemingly a background conglomerate of Cork and Dublin, the home ground of the novel is really an archetypal contemporary Irish city and the narrator, whose name is closely guarded, is a representative – though far from stereotypical – marginalised figure who has been bred to petty crime and drug-abuse by the depredations of his Corporation estate and by the ruins of his family and of almost every other family around him.

Wall’s talents for linguistic compression are occasionally damaged here by vocabulary inappropriate to the narrator (“calcifying”, “wept”) and by a loosely designed ending. His cleverly devised secondary characters – especially the narrator’s zany childhood friend, Max, and the old gun-toting Protestant farmer who emerges as his benefactor – are somewhat counteracted by the cartoon cops who appear as gardai. What is undiluted, however, is Wall’s insightful and robust social conscience. In his hands, the narrator becomes a kind of working-class Frankenstein, created by uncaring Irish legal and social structures and permanently consigned to looking in from the outside on success and comfort: “People sleep in the houses and dream dreams of their own making, they have no legend forced on them by circumstances outside their control. Their houses are full of little devices that make things happen … Sun comes early and turns the whole place into a crystal. It warms the city to have this precious structure making and remaking in the light of each new day, throwing the way things should be onto the way things are, the fragile faces luminous and new-Windolened, the doors releasing little gusts of normal whenever someone comes or goes.” Because the narrator is a believable personality overall, and because Ireland is therefore delineated through a convincing interiority rather than a mere journalistic recitation of public events, the sense of desolation and bleakness here is persuasive. In a corroboration of the increasingly high quality of Wall’s prose, the achieved mood of this novel is unlikely to put a spring in the blithe reader’s step in a walk around certain areas of this country’s cities.

[John Kenny Is an IRCHSS Government of Ireland Post-Doctoral Fellow at the Centre for the Study of Human Settlement and Historical Change, NUI Galway ]

Sue Leonard's Books Ireland review of This is the Country

This is the Country is a novel covering the bleakness of the underbelly of Irish life. It could be an unbearably harsh read, but Wall has infused his tale with lyricism and true compassion. A bright teenager drops out to a world of drugs and violence, and hovers at the edges of gangland society in present-day Ireland. Then he makes his girlfriend pregnant. Embracing his role as lover and father, he manages to turn his life around. He becomes a marine engineer and lives a conventional life. He “even pays tax on non-cash transactions”. Then news of a murder brings back the old fears. Can he escape the violence of his past? It’s harder still, when the establishment seems set against you. / This is told in the first person by the unnamed hero. The language reflects his world, but it’s always fresh and vibrant. By the novel’s close, coherence has come in; and the words are touched with a sweet tenderness to sugar the sadness. / Wall’s novels have always had the capacity to move the reader. In this novel, the tenderness emerges more gradually; the reader will be taken by surprise when the build up of emotion becomes overwhelming. [… &c.].’